*Rate is per person, land only, double occupancy, tour inclusions and available options may vary based on departure date. Please select a date below for more details. 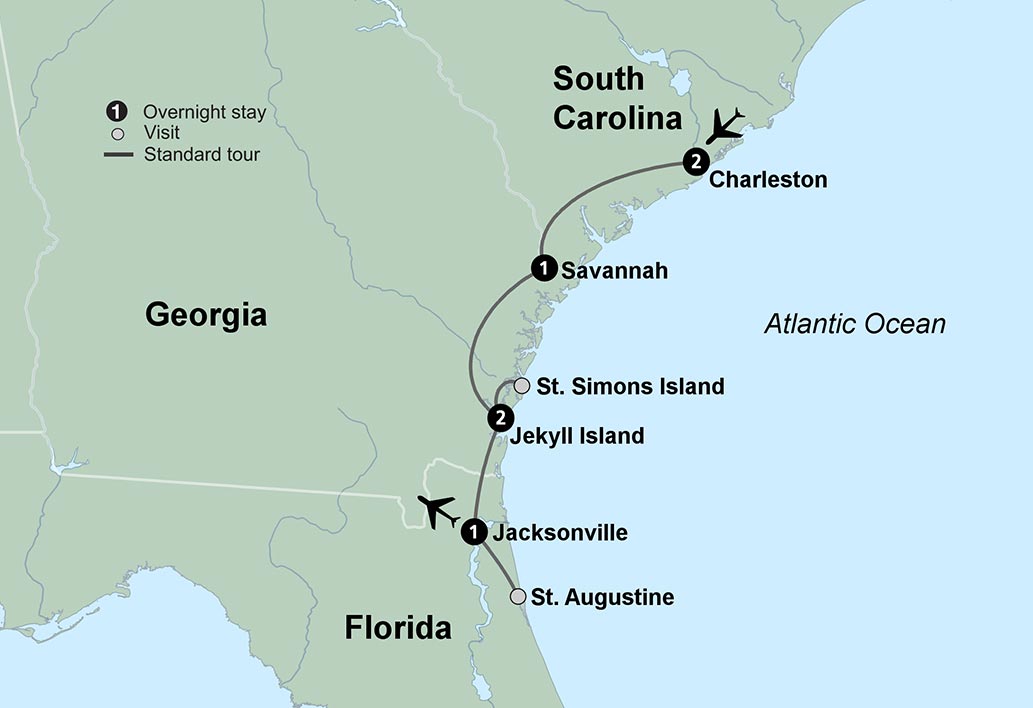 Experience the history, charm and singular hospitality of the Low Country in Georgia and South Carolina. Soak in two nights at the exclusive Jekyll Island Club, once described as “the richest, most exclusive club in the world.” Choose to explore one of America’s oldest plantations, Boone Hall, or the Patriots Point Naval & Maritime Museum. Discover the history of Savannah and antebellum Charleston. Visit the oldest city in the United States, St. Augustine, Florida, and enjoy an enchanting trolley tour through its vibrant Old Spanish Quarter.

Experience true southern hospitality and charm in South Carolina and Georgia. Your tour opens in beautiful antebellum Charleston, where magnificent formal gardens grace much of the Historic District.

Charleston has survived the Civil War, major fires, an earthquake and hurricanes – and still exudes elegance, charm and grace. Accompanied by a local guide, you’ll get to know the city including its cobblestone streets, historic homes and restored buildings, some with origins prior to the Revolution. Stop at the battery overlooking Fort Sumter where, on April 12, 1861, the first shots of the Civil War were fired. Continue on to City Market, one of the oldest public markets in America, where you will meet a local artisan and learn about the tradition of weaving Gullah sweetgrass baskets, one of the oldest handicrafts of African origin found in the United States. Following your city tour it’s your choice! Perhaps you will choose to visit Boone Hall Plantation; experience southern plantation living as you explore one of America's oldest working plantations set amidst moss draped oaks. Or, maybe you’ll opt for Patriots Point Naval & Maritime Museum; board the impressive USS Yorktown aircraft carrier and walk in the footsteps of sailors and officers as you tour the flight deck; you’ll also visit the Congressional Medal of Honor Museum and view the largest collection of military aircraft in the United States. This evening, enjoy a local specialty – the famous She-crab soup – at dinner!

Enjoy leisure time this morning to continue exploring Charleston independently. Travel south along the coast through South Carolina’s Low Country to historic Savannah, home of the largest National Historic Landmark District in the United States. Have the afternoon to wander this enchanting city’s tree-filled squares. Spend some time exploring Factors Walk and River Street, where old cotton warehouses have been converted into trendy shops, taverns and restaurants.

Begin the day with a walking tour of Savannah's sprawling Historic District. Make your way along the cobblestone-paved streets beneath moss-draped oaks and take in the ambiance of the “Old South.” From her stately mansions, beautiful squares and romantic riverfront you are sure to fall in love with this city. Next, visit the beautiful Andrew Low House and Gardens and learn about the driving force behind the Girl Scouts and its founder, Juliette Low. Located on a scenic bluff off the Wilmington River, visit the Bonaventure Cemetery, made famous in the book and subsequent film “Midnight in the Garden of Good and Evil.” Travel south along the unspoiled Georgia coast of vast marshlands, winding rivers and beautiful beaches. Later, arrive at the exclusive Jekyll Island Club Hotel, grandly situated in the midst of the fabled Golden Isles.

Jekyll Island was once the winter retreat of prominent Gilded Age families. Their grand “cottages” still stand. A tram brings you on a tour of the Jekyll Island Historic Landmark District – one of the nation’s largest restoration projects. The Rockefellers, Vanderbilts and J.P. Morgan once vacationed here along the 240-acre river edge. Visit another of the fabled Golden Isles, quaint St. Simons Island. See its striking 106' tall lighthouse and visit the Museum of Coastal History. Later, enjoy leisure time to explore the quaint shops and restaurants in the village.

Travel south to the United States’ oldest city, St. Augustine, first settled in 1565. Here you’ll enjoy a guided trolley tour highlighting the Old Spanish Quarter, historic Bayfront, “Old Town” which dates to 1572, and the Plaza de la Constitucion with its shops and restaurants. Spend time at leisure this afternoon and come to know more of the city’s many cultural attractions. This evening, arrive in Jacksonville and join your fellow travelers for a farewell dinner.

Your days spent experiencing true southern charm and gracious hospitality will stay dear to your heart for years to come.

Why Book with us?